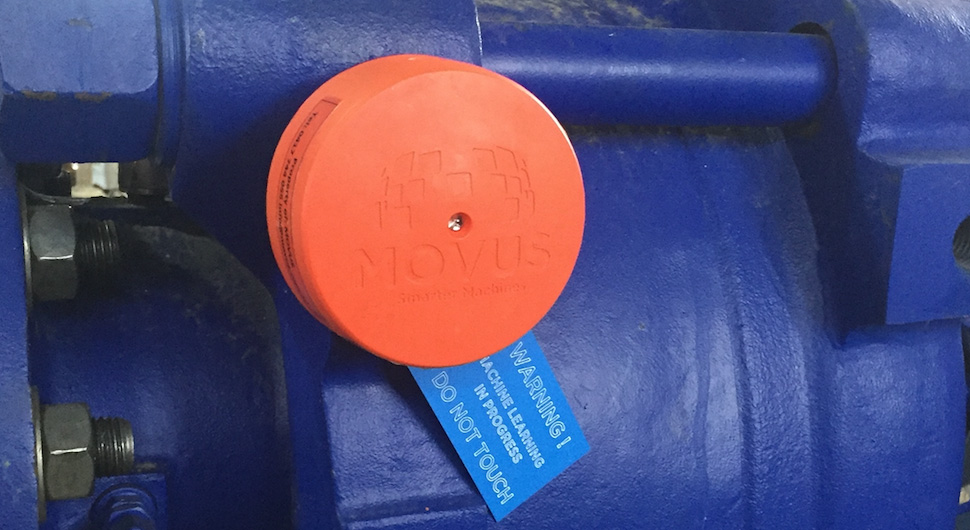 Since the industrial revolution, weekly or monthly manual inspections of on mechanical equipment have been a fact of life for businesses in a number of industries. Skilled engineers in sectors such as mining, manufacturing, construction and other heavy asset industries diagnose malfunctioning plant and equipment by observing changes in noise, temperature or vibrations.

However, manual inspections can be costly and time consuming, and a lot can go wrong between inspections.

A Brisbane-based startup called MOVUS is looking to solve the issues with an end-to-end solution that integrates sensors, cloud-based machine learning powered by Amazon Web Services, and an analytics dashboard for end users.

The decision to create the system was based on first-hand knowledge of the MOVUS team, which boasts a combined 150 years’ experience across a range of heavy asset industries.

“What we noticed was there’s a distinct gap in knowledge between the decision makers and what’s happening with machinery – decisions are being made with a complete lack of knowledge around the location, health and utilisation of machinery,” MOVUS CEO and founder Brad Parsons told BIT.

“What we decided to do was attack that problem by building a sensor that can track machine health information in real time to turn that industry around from a practice that has happened for 100 years where inspections are done [on location] once a month or once a year.”

How the device works

To solve the problem MOVUS began developing the product, which it calls the Fit Machine, in January of this year. The system is able to detect the location, utilisation and condition health of machinery to pick up failures before a machine fails and let the customer know.

To solve the problem MOVUS began developing the product, which it calls the Fit Machine, in January of this year. The system is able to detect the location, utilisation and condition health of machinery to pick up failures before a machine fails and let the customer know.

“We’re currently detecting vibration, temperature and noise. As any mechanical engineer will tell you, by focusing on those three metrics we can cover many of the failure modes of the machine,” Parsons said.

“If an engineer walks up to a machine and listens to it, they can typically know if it’s failing – if they walk past it often enough they can tell straight away. A lot of detection technologies use vibration, and the third spectrum is temperature.

“By using those three and passing them through our machine learning algorithms, we can detect a failure. If it’s vibrating more, the temperature is rising, or there’s a particular noise that’s a deviation from what it’s learnt, we can alert customers that the machine may need further inspection or repair.”

Parsons said the product is intended as an end-to-end solution that will be offered to customers as a bundled service.

“We’ve developed a sensor that transmits via WiFi or Bluetooth to a gateway unit. We can get up to 100 devices back to one gateway. It then sends to the cloud via Telstra’s 3G/4G mobile network, and then we have a cloud solution on Amazon, which is fully scalable,” Parsons said.

“Once the sensor is installed, it takes seven to 10 days for it to learn the current health of that machine – what is the current state of the machine. And once we have that baseline, what we can detect if there is a failure of the machine a week, a month or a year later.

“The user is presented with a dashboard, which is part of our key IP. It streamlines the decision-making process by giving them two key metrics.”

How it was developed

MOVUS is a graduate of the University of Queensland’s Germinate accelerator program, and occupies what Parsons describes as a “growing footprint” in the ILab innovation hub.

“We’re based out of Brisbane. We went through UQ’s innovation program and they’re a shareholder in our business. We’ve operate out of their innovation lab, which is known as ILab, which is fantastic because it gives us access to the best and brightest UQ has to offer,” Parsons said.

“We walked in with a concept, but myself and my business partners had come in from big asset industries where we’re running teams of 30 or 40 with $10 million of budget. But what we didn’t appreciate is how to build a tech startup from the ground up.

“Through ilab we were able to gain access to mentors that have been through the process and know the challenges we face. We were able to adopt that.”

Having completed the program, the MOVUS team has iterated through three or four versions of its product, and have been testing their minimum viable product in the market for around six months.

“We’ve had quite a lot of interest but we’ve held back as we’ve held back, but we have six trials with large industrial businesses starting in January and February of next year, and that will broaden the use cases and development.

“So we have [a minimum viable product] but we’re not actively selling that, we’re broadening our use cases to increase the value proposition before we actively market it.”

How it’s being funded

To give it the funds to grow, MOVUS is looking to go through a series A raise early next year, and is currently focusing on developing new use cases ahead of a public launch next year.

“From what we can tell, we’re fairly unique, and that’s an opportunity and a challenge. Traditional methods have been out there for such a long time and we’re disrupting that space,” Parsons said.

“We’re in education mode between now and then, but second half of next year we’ll have it broadly available. You’ll be able to order and install them yourself, have the dashboard ready, and the involvement from us is minimal, so the scalability is dramatic.”

Ahead of the raise, MOVUS was one of 12 startups selected for KPMG’s Energise energy and natural resources (ENR) accelerator program, which kicked off at the end of November.

Unlike other accelerators, the program is focused on late stage early seed funding. Parsons said startups need a different discipline to roll from seed into growth phase, and that’s something KPMG’s program assists with.

“In the KPMG program, there’s a lot of groups with synergies we think we can partner with. There are groups in data analytics, there’s a group working on blockchain and we think there could be opportunities to work with them to integrate that into our service,” he said.

“What we’ve noticed is there are opportunities for collaboration. The teams that KPMG have assembled are highly complementary, and at the same time we’re not stepping on each other’s toes. So the big benefit from the program will be learning from other teams at a similar stage of development.

“The Energise program is running this year in Brisbane and Perth, which is fantastic given the focus is on mining and resources.”